Blanche Gardin: “Why should you trust a machine?” 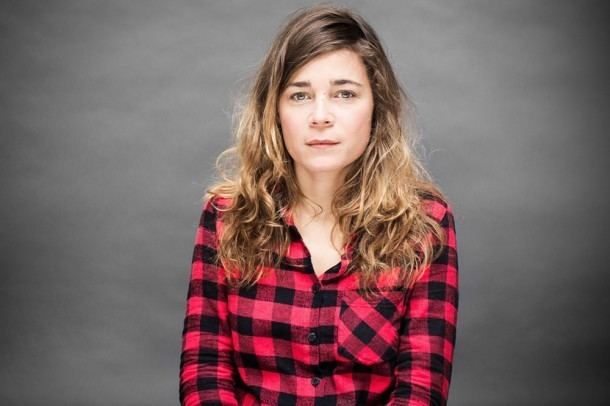 Delete History (Effacer l’historique) takes place in a provincial French suburb, where three neighbours are overtaken by the emergence of new technologies and the horrors of social media. Actor, writer and comedian Blanche Gardin plays Marie, one of the neighbours whose own world is overturned by the emergence of a sex tape and those consequences. In this Q+A, we chat with Blanche about her new movie, what it’s like to work with the team of Delepine-Kervern, and the overall implications of new technology on us humans.

Do you believe new technologies and new forms of poverty or loneliness are connected?

I do. This film takes aim at progress, and that’s fine by me. Whatever you may think, we need to criticize progress, which isn’t necessarily a reactionary attitude. We could really act differently: we could progress in human terms instead of only technologically. We’re so convinced we’re the best because we’re the most recent version of humankind, but truth be told, not necessarily – it doesn’t have to work like this. The fact of the matter is, if you talk to geeks, they’ll tell you the best iPhone isn’t necessarily the latest version. Progress isn’t always linear. I’m totally unapologetic about criticizing progress and this film epitomizes it perfectly – technological progress involves disrupting human connection. And then it leads to the most depressing standardization you can find. In bars, people only talk about the latest TV show – it’s become the sole topic of conversation.

You come from a stand-up comedy background. How different – even challenging – was it for you to play a role and speak lines you hadn’t written?

What happened with Kervern and Delépine is quite unique. I don’t think I’ll experience it again. We were like soulmates, we understood each other to a degree that most humans never reach. There was a good deal of me in the part and I don’t think it was a shoot like any other. I didn’t feel like I was acting or portraying a role – I was both an audience member and immersed in the KervernDelépine cauldron where a kind of magic potion was simmering. I came out of the shoot feeling worn out, but for the right reasons. So, I can’t really make an overall comparison between film and stand-up comedy. On stage, you get the impression you can control what you’re doing, you can’t see yourself, whereas on the shoot, I could see myself. And I could see both guys coming on set in the morning, looking at the scene we were supposed to do and saying: “That’s no good, that’s crap!” and then tearing up their own screenplay and racking their brains, with or without me… But all the while, they remained the sweetest guys, generous and kind to everyone. They film in long sequence shots and let the actors breathe and flesh out their characters. I came up with a lot of ideas because I have a hard time speaking dialogue I haven’t written. It was awesome.

You’re used to being alone on stage. How did you feel playing opposite other actors?

It’s different, but then again not so much, as the audience at a show is also a character with whom you have a dialogue. You play with the audience, and it’s no figure of speech, it’s a fact. It’s a different audience every night and you play to what they respond to. In film, there’s also an audience – the crew. You want to please them, to make them laugh… But it’s awesome to act with great actors and discover them, and on this film I was so lucky to act alongside incredible people… Corinne Masiero, Denis Podalydès, Houellebecq, Poelvoorde, Lacoste… greats only, I was on top of the world!

Were you familiar with Benoit Delépine’s and Gustave Kervern’s work, prior to doing the film?

I’ve been a distant admirer of their work for a long time. I secretly hoped we’d actually meet one day. Meetings are weird: when you know ahead that it’s going to work out, well, it does! Every time I saw their films, I thought I had a very strong connection to them, that we were brothers and sister. When I met them, I was very intimidated, I spent a lot of time studying them, like Jane Goodall with her gorillas. I had to find my way in to actually being with them. The magic eventually happened. I’m not sure whether I adapted to them, or they to me, but there was such a wonderful union between us. I’d never experienced anything like that artistically speaking.

Were you ready to work with them whatever the material or did you make your decision based on the script?

I related to the issues addressed in the script and I recognized their social, poetic touch that moves me deeply. And it was funny. I guess I relate to all of Kervern’s and Delépine’s characters! To Depardieu in Mammuth, to Yolande Moreau in Mammuth and Louise-Michel… I relate to what we all have in common and we can all agree on. It’s not easy to like what you see every morning when you look at yourself in the mirror, but there’s always a respectable place deep down, and that place is our humanity. There’s always that place in Kervern’s and Delépine’s characters. They don’t write entirely unpleasant characters – they always reconnect us to a decent version of ourselves. I embraced Marie 100%.

Marie appears to be more of a slacker than you, since your career involves much hard work and determination.

Well, I haven’t always been a hard worker. I used to be a slacker, I was lost and my bearings in all senses of the word. Phones have replaced our offices and the people we ask for directions. One day in Lille, I had drunk too much and I smashed my phone, saying to myself: “Down with consumer society!” The next day, I woke up and realized that my train tickets were on my phone! I was lost, I didn’t know what time my train was leaving, or even where the station was. I stayed there, stranded like a beached whale. I didn’t even feel like asking the people around me for directions. With cell phones, you lose touch with reality. So, from that perspective, I relate to the film.

The scene where you store your passwords in the fridge is very funny and telling about the absurdity of our times.

Sometimes computers generate a password. It’s actually the computers that know your passwords. So you tend to feel safe as if your computer was a loyal friend, with a moral compass… but the truth is, it’s not at all! Why should you trust a machine?

Christine is hooked on TV shows and she’s played by Corinne Masiero, who’s famous for her role in a TV show, Bertrand has issues with the internet but he owns a giant TV screen and has subscribed to several online services… The film highlights the contradiction you were talking about – we long for technology while fearing in it a new type of willing slavery.

It’s more and more difficult to live according to your own ideas – you’re facing unprecedented contradictions. People have never made so little sense. The greatest environmentalists switch on their cell phones in the morning although we all know that high tech pollution is a fact. We don’t know where all this is taking us but for the time being, it’s no fun at all. I believe we all are at some stages in our lives. None of us is a single person, we are many throughout our lives. Even today, I have moments when I feel like Marie, when I say to myself: “What’s the point?”. Especially when dealing with the new values the world came up with that are – let’s face it – ugly. I’m thinking of the gross economic Darwinism where you can either adapt or die. You’re forced to relate to that, even if you’re part of the game’s winners. You could just as well find yourself on the losers’ side, or even wake up in the morning to go help people instead of making money… I guess we all entertain that relationship to a world that’s gone very wrong, where you feel cut off from future and past generations.

The film deals with economic – and digital – Darwinism. Do you relate to the complex relationship with new technologies the film speaks about?

Like many people, I feel left behind and compelled to use them. It’s a slavery of sorts. You don’t feel so lonely when you have your cell phone handy but you know it’s not true – you’re just as lonely as ever. You call people less and less, you text them to keep a connection that’s not really a connection. Those new tools bring about a kind of human laziness.

The film also addresses the digital surveillance that we are all subject to – behind our backs – and that Marie falls victim to with the sex tape blackmail.

Yes, it will end up making us “model” citizens so that we can’t be confronted with stuff we did ten years ago. We’re moving towards a kind of social control that will be more and more handled by people themselves – we won’t leave any trace that may be held against us, we’ll lie low. It’s all well-organized.

In the virtual world, you don’t know who to turn to when a problem comes along. That’s exemplified by Marie’s and Bertrand’s failure to solve their problems – they either deal with security guards or robots.

Marie goes to visit Google as though Google was a person. But it’s a losing battle. The tech giants’ power is intangible and untraceable. We’re all outraged at how powerful the digital corporations are but we know all the same that we can’t do otherwise – that we need to adapt. There’s also something playful about digital services and yet it’s extremely perverse. You can’t possibly tell people: “Let’s do away with cell phones” – we’re way too addicted, including me, even if I’m not a big user.

In the end, will you take from this film the comedy or the terrifying comment on our times?

Today, you often hear the term “dramedy” and I think that’s the right word. A comedy involves too much relativism: “Come on, that’s not such a big deal, why not laugh about it?” That’s not this film’s take at all, it’s much more desperate than that. DELETE HISTORY says we’ve lost the battle to some degree, but it remains hopeful about people and their humanity, about what we keep carrying inside, despite everything. The film is tragic when it comes to the problems of the system, but cheerful about people. There’s a part in everyone that keeps hoping other people mean them well.

Thank you to Wild Bunch for interview.

Delete History is out now.