Peter Singer is a philosopher, professor and pioneer on issues like animal welfare, poverty, and most controversially, euthanasia and abortion. He has, or surely must have somewhere, been described as the ‘Godfather’ of the animal rights movement. I’ll be shocked if it’s taken this long for such a lazy and obvious phrase to be coined.

Regardless, for over 50 years he’s been one of if not the leading moral philosopher on the subject of ‘non human’ animal welfare and first introduced the term ‘Speciesism’ (the idea that one species i.e. humans hold absolute rights over their non human animal counterparts) in 1975 with his, in vegetarian terms, revolutionary book ‘Animal Liberation’.

Here, we talk initially talk to promote ‘The Life You Can Save’, a book first published in 1999 which focuses on how individuals can help tackle world poverty (how we can ‘do our part’), now updated for current times with a celeb cast in support. We discuss the book’s rerelease, it’s key themes, and also squeeze in some chat on Religion’s influence on animal cruelty, overpopulation and GOD himself.

It’s been 10 years since you released ‘The Life You Can Save’ – what impact do you think that book has had since you wrote it?

It’s had a very significant impact on many people.  Among them is Charles Bresler, who read it and it changed his life. He left a very successful career in the retail industry to become the (unpaid) executive director of The Life You Can Save, an organization that really existed in name only when he came to it.  Now it is spreading the ideas of my book, and channeling millions of dollars to the non-profits that are most effective in helping people in extreme poverty.

The 2019 edition is fully revised and updated, but best of all, the rights are now held by that organization, and so it is distributing the new edition free, as an eBook and as a celebrity-read audiobook [Kristen Bell, Stephen Fry and Paul Simon are among the narrators]. 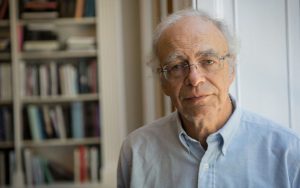 Don’t Governments hold the ‘responsibility’ to be active on issues like mass poverty, rather than their citizens?

I wish governments would address it adequately, but they don’t.  By all means, be an active citizen and encourage your government to bring about a more just world.  But in the meantime, when governments are so plainly failing to do what they ought to be doing, you have the power to make a life-changing improvement in the lives of people living in extreme poverty. So don’t just sit back – do it!

There are some changes [to it now] to bring it up to date [in the context of today], but of course, I stand by everything that is in the new edition.

Politics plays such a big part in shaping these things and politics in 2019 is quite morbid – where do you sit?

I’m a green social democrat, that is I favour a society with a liberal democratic government, a regulated, environmentally sustainable market economy, and comprehensive social welfare provision for those who do not do well in that economy. But I agree that it is hard to take comfort in politics today.

Is there a book of yours you think has made a bigger difference than any other you’ve written?

I do think that Animal Liberaiton has made the most difference so far, but The Life You Can Save is a close second, and if the new edition gets the readership that we are hoping we will achieve, because of the free distribution of the eBook an audiobook, then perhaps its impact that will pass that of Animal Liberation.

Is poverty a result of a world so overpopulated?

I am concerned about the rapidly rising populations in some of the world’s poorest countries, but at the same time we have seen dramatic reductions in poverty in China and India, despite their very large populations.  So obviously population is not the whole story.

And your next project tackles the theme of overpopulation…

I’m currently discussing, with two possible co-authors, a plan for a book that will ask whether the growing world population is a problem, and if it is, what might be ethical ways of responding to it.  But for various reasons, these plans had to be put on hold during 2019, and we have not made a lot of progress yet.  I’m hoping that will change next year.

What do you see as the solutions to such an issue?

I’m not ready to answer that question yet.

Like many others I stopped eating meat after repeatedly listening and thinking about the song ‘Meat is Murder’. Why do you think popular culture is effective at shifting the mindset?

Is it really so effective?  Most people still eat meat, despite the overwhelming argument against doing so.  I wish popular culture were more effective in bringing people to live a sustainable lifestyle that eliminates our complicity in the horror of industrial animal raising. 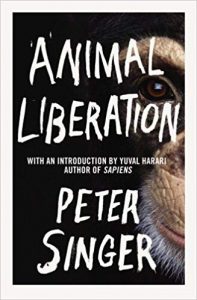 Do you think there will be an age where animals are not bred, raised and killed for food and is there any Darwinian element in this evolution ?

I certainly hope that there will be, but I don’t think it is going to have much to do with Darwinian evolution.  If it happens, it will be a result of our reasoning ability, which enables us to reach across the species barrier and see that animals suffer as we do, and the fact that sentient beings are not of our species is no reason for ignoring or discounting their suffering.

I was shocked to read that you confessed to not being an ‘animal lover’?

I was just making the point that you don’t have to love animals to think that it is wrong to treat them as we are currently treating them, incarcerating them by the tens of billions in factory farms that give them miserable lives.

As an animal lover, there’s a level of outrage and even depression when I see what happens  in the name of ‘dinner’ or ‘fashion’…

I am certainly outraged, as you are, but I don’t let it depress me, instead it motivates me to try to get more people to see it the same way, so that they will stop being complicit in this atrocity by consuming its products.

In interviews you’ve across as a logic, reasonable and perfectly well mannered man – yet some of the things you talk about, such as infanticide, are seen as controversial and you’ve had some awful things said and written about you – How do you react to nasty criticism?

It’s very important to me that people understand my views and the reasons why I hold them.  If people are willing to take the trouble to do that, and then provide reasons why they think I am wrong, that’s fine, it’s what philosophy is all about.  But when people try to shut down debate, or simply become abusive or even violent, I deplore that.  It’s taking us in the wrong direction.

How does your own atheism influence your thinking in seeing animals and humans as being ‘equal’ in their suffering? I’m thinking here about ‘saint’ Thomas Aquinas and his outlook.

Aquinas certainly had horrible views about animals, saying that nothing we do to them is a sin, unless it happens also to be a sin against humans.  But I recognize that not all theists, and not all Christians, have views that harm animals.  Take my friend Charles Camosy, a Roman Catholic but also a vegetarian and the author of a fine book, For Love of Animals. And there are many others like him.  So for the sake of animals, we need to work together with religious people who understand the wrongness of our treatment of animals.

‘God’ may be ‘not’ so to speak, but would such a being appeal to you even if you cant believe?

I don’t think about that much, because I can’t conceive how a God with the Christian attributes could be compatible with the world as we see it, with all its gratuitous suffering, experienced both by humans and animals.

Peter Singer’s ‘The Life You Can Save’ eBook and audiobook can now be downloaded, free, from www.thelifeyoucansave.org.