Taisiia Cherkasova: “It is up to the viewer to find true meaning” 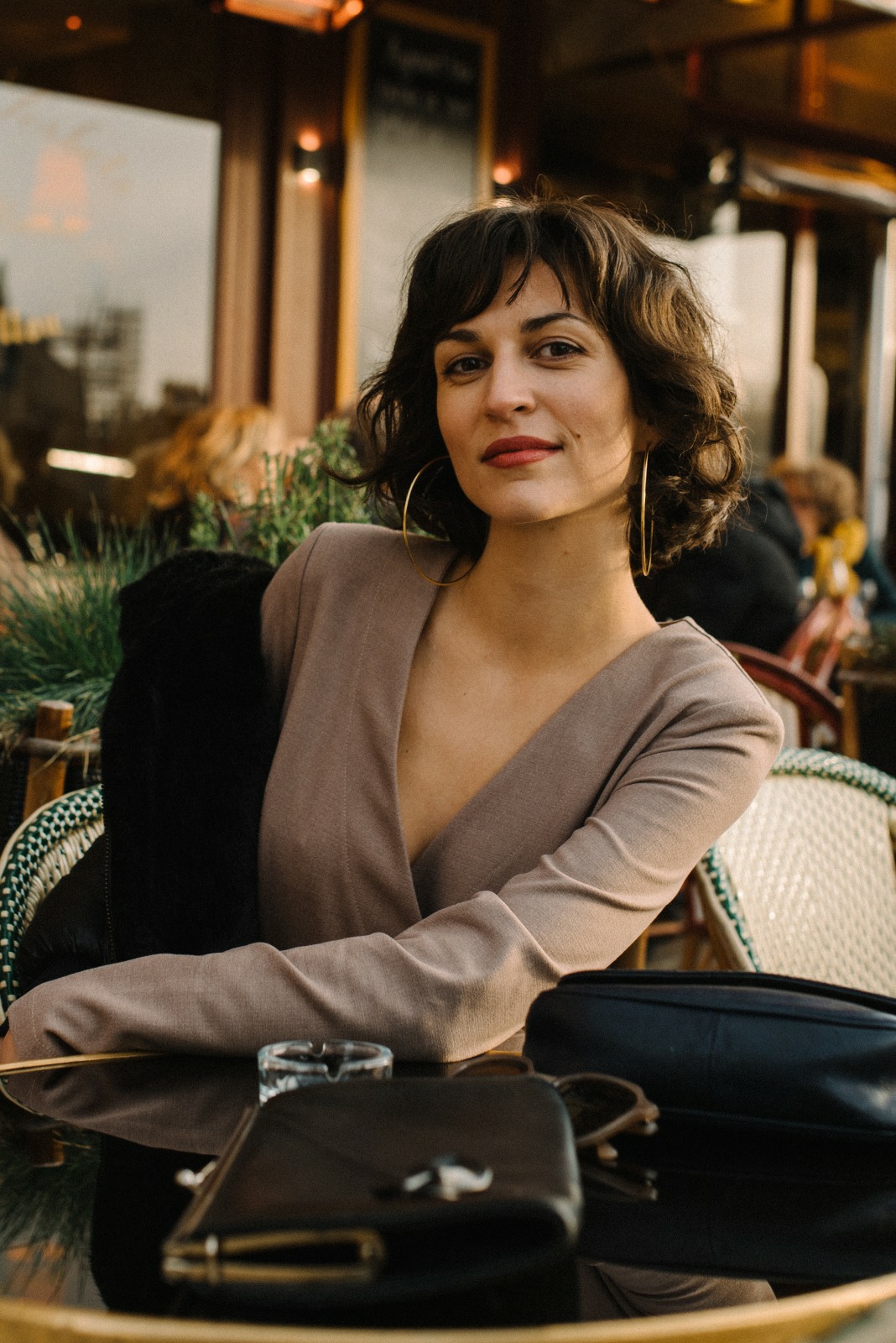 “We can see familiar things while immersing ourselves in a parallel imaginary world..”

Born in Ukraine the same year the country was freed from Soviet-Communist rule, Taisiia Cherkasova is an artist who deals primarily in allegory, using a mixture of animals and dream-like visions to create work that is somewhere between Salvadore Dali and Michael Sowa.

Leaving behind what she has described as the ‘depressive reality’ of the Eastern bloc, she moved to Paris to pursue a career in engineering before eventually taking the ultimate risk, the one to become an artiste. Perhaps it was always meant to be – she even looks like a prettier version of Gustave Coubert’s The Desperate Man.

Her work appears much more surrealist rather than overtly political, which she maintains it is. But like she says, ‘it’s up to the viewer’.

What is more important: the idea or the execution?

For me, the idea is more important than the execution. But technique is the way to transmit my messages and my ideas. As a writer uses – words to tell his story, I take care of my technique, I work my characters I give them a personality, I create an atmosphere and I try to make it all realistic. So I think that the idea and the technique are inseparable, but the most important aspect is the idea!

Where do your ideas come from and how do bring them to a finished piece?

I can find inspiration in my daily life, in the art of other artists, in cinema, in word games, on social networks or in a store window, anywhere. The most important thing, in my opinion, is to be open to this sort of vibration. However, there are subjects that pique my interest more than others: societal subjects.

The fragility of the living is a topic that I have touched on several times in my painting, I am very sensitive to environmental issues such as global warming and the extinction of a species. Today I ask myself a lot of questions about the clichés of beauty, the importance of physical appearance, old age and narcissism. For me, these questions are often linked with more global problems like racism, homophobia and sexism. To represent my reflection on these subjects I use allegories and symbols. Ideas often come up in public transport or in the shower.  Then I go to the execution and from this point, I can have fun for a long time. It’s not always easy to quickly find the best way to represent all my ideas, so try things, finish and start again, improvise… In short, I try to do my best.

How has your approach changed over the years?

I think the main difference is that at the beginning I didn’t represent humans in my paintings. Today I am much more interested in human nature.

You’ve said previously you want to “denounce overconsumption, attachment to objects, inequalities and the extinction of the living by using imaginary allegories.” Can you explain further?

An allegory that I have used several times is a vase, or porcelain objects, or any kind of object that has an aesthetic or historical value and which is fragile. I transform the body of animals into porcelain to underline the fragility of nature and to remind that animals are not at our service, that they are living beings and not objects. It is up to the viewer to find the true meaning of the artwork. I really like to use this trope in my work even if sometimes people have their own interpretation which has nothing to do with my message.

What’s the boldest move you’ve made for the sake of your career?

I believe that building an artistic career is already a very daring decision! (laughs)

To me, some of your work seems very surrealist, even Bunuelian.

I really appreciate the comparison with Luis Bunuel’s work, thank you!  Let’s say that I am very inspired by surrealism. In this movement lies provocation, exaggeration, humor and poetry. I love it all but I do not consider myself as a surrealist in the appropriate meaning of the term. I do not aim to represent dreams or fantasies but a reality.

Then there’s Michael Sowa (admirers of ‘Amelie’ will be familiar)  – why are animals such an important part of your paintings?

Oh yes! I really like this artist and I love his work in the film Amelie. I was very young when I first saw this film and it certainly influenced my work later. In the past, representing animals in my works was so natural for me that I wouldn’t even think twice before jumping into it. I think I didn’t make much difference between Man and Animal. Besides, from a scientific point of view, we are animals.

Today I am more aware of the choices concerning my characters. No doubt I am in love with animals but that’s not the only reason why they have such an important place in my art. I believe in the power of art and I believe that thanks to artworks we can change the world and give rights to those who have them but who have no voice to claim them.

Which brings me to a story you write about when you were 7 years old, in post-Soviet Ukraine. In this tale you witness a drunken neighbor throw her dog from a window. It must have had a huge impact on you.

This scene had a great influence over me for sure. It was the worst act of violence committed towards an animal that I have ever seen. The dog was still alive when I approached, the blood flowed from his mouth, slowly he closed his eyes and this nightmare stopped for him. It was the first time that I saw the end of life of an animal which had been treated like an object. In spite of all the horror of this situation, it greatly fueled my imagination. When the body fell I heard a noise, as if it was a half-empty plastic bottle that fell. But it was not an object of daily life, it was the body of the dog. I think it was the moment which suggested my first allegory.

What was it like growing up there, and that time in particular – you have referred to your ‘depressed reality’?

First of all, it may be necessary to clarify that despite everything I say about this time I had a good childhood. I grew up loved by my family and I lived a real friendship. But the Ukrainian mentality and especially the atmosphere of my neighborhood were strange to me. I was born in 1991, so Ukraine has already had its independence status. The 90s people in post-Soviet countries wanted to get rich at any cost. We lost the value of intelligence and culture. Those who were unable to fit onto this new way of life went on their lives as they could and a lot of people became alcoholics or criminals.

In general, everyday life was nothing extraordinary. I went to school 6 days of school per week, my parents left in the morning to work and returned in the evening… My feelings are mixed, on the one hand, I have many good memories, I met wonderful people, I had lots of friends but on a daily basis I saw families suffer from alcoholism, young people who no longer saw prospects of a future and who took drugs, others stole…

The person who threw the dog out the window was a mother of three children, she had a fairly ordinary life for that time. Her and members of her family suffered from alcoholism for years. The end was tragic. Her husband, her son and herself died from alcohol addiction. When I was a child she scared me, because I saw a monster in front of me, but I felt pity for her too. I never understood why she took such a choice in her life, I don’t even know if it was really a choice but I knew several families like hers and the more I reflect on this subject the more it makes me sad. Maybe people feel useless, desperate maybe they get bored…

You’ve also spoken about Mikhail Bulgakov’s book “Dog Heart” also having had a big impact on you?

The author uses many daring and original allegories for his time. The professor makes a surgical intervention and transforms a dog into a man, this creature makes a reference to a New Soviet Man – proletarian. You should read it, I think you will like it. I don’t want to spoil it for you, but I can say that it’s not as fantastic as you might think, it is above all philosophical and satirical.  The story of this poor dog is basically very intriguing, it’s sad and funny at the same time. But this book has a double facet, the primordial idea of the author is hidden. You need to engage on some additional analysis in order to grasp hidden messages. It’s creative, original and fun it’s like a game, that’s why I really like this book. There is also a film which is very close to the original text.

Lockdown seems to be easing up now. But for an artist like yourself, is isolation an ideal situation?

It depends on the duration. I really enjoyed it at the beginning of quarantine. M workshop is located at home, so I spent a lot of time working, but towards the end I was growing weary. I needed to share life with other people and do something else.

And as quarantine is now easing in many areas, can you tell me about what happens next for you?

For this summer I have a lot of work and I started a lot of new projects. For instance, I made a residence and my paintings are on display at Ellia gallery. If you are in Paris right now, come by and say hello. You can see my work there but also have an insight into my creative process.

I’m about to take part in a collective exhibit at Pocket Art Studio Gallery in Rome. From October 10th to 18th I will take part to a collective exhibition at workshop gallery Oblik (19 rue du Dr. Emile Roux 92110 Clichy ), organized by POZOR Modern Living Art. Come in large numbers, we are going to do stamp workshops! For the rest I do not have precise dates yet, but I will communicate them on my social networks.