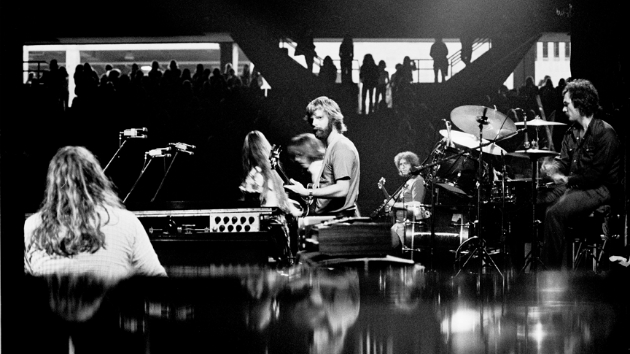 Lovers of rock music will very likely have heard of the Grateful Dead, but their reaction often veers from musical obsession to scorn. Some consider them the greatest band to have walked the earth. Others dismiss it as long, noodle-y and aimless in its form; just Jerry Garcia running scales up and down the guitar. However, there was undoubtedly something special about this band. They consistently created a beautiful, transcendent quality in their music I rarely seem to find anywhere except jazz. The band were highly indebted to that genre as well as countless other forms of American music.

I discovered the Grateful Dead, funnily enough, through an episode of the cult sitcom Freaks and Geeks. When the protagonist Lindsay is feeling down, her guidance counsellor gives her an LP of their classic album American Beauty. Listening to it alone in her room, her spirits are almost immediately lifted. Despite being fictional, this scene really resonated with my experience and probably countless others. If I’m feeling sad, the music of the Grateful Dead is almost always the perfect antidote. It’s partly this emotional reaction within people, including myself, that has consistently created fanatics of their music for almost fifty years.

The band had their roots in the San Francisco sound and counterculture of the late 1960s, but unlike many of their contemporaries they transformed their sound rapidly, going into the ‘70s. Trying to categorise their innumerable influences is tough, but in their first ten years they deftly incorporated psychedelic rock, blues, country, folk and jazz into one cohesive sound. Succinct and sweet melodies of Americana are clear on the studio album American Beauty, but it was their live shows where they really shined. In their early years they could easily exceed three hours, leading to a common saying amongst fans that ‘there is nothing like a Grateful Dead concert’.

It’s a listening experience that is often genuinely exciting, surprising and emotionally powerful. Their shorter songs display some incredible songwriting, in terms of both music and lyrics. Robert Hunter, a non-performing member of the band, wrote the lyrics to most of the band’s original songs. I would rank him up there with Bob Dylan in the evocative power of his writing. He had a great ability to tell stories that reach into the distant past but still touch on an ever-present human condition. He also conjured up many mystical lyrical abstractions that perfectly complemented the band’s early psychedelic forays.

The longer, improvised pieces the Grateful Dead are well known for also evoke a kind of fleeting beauty for me. Like many jazz groups they would extend solos over chord progressions to slowly tease out new musical ideas in the moment. In their early years they also became incredibly adept at improvising together without a specific form or structure. Each band member effectively playing a ‘lead’ instrument and responding to each other’s changes almost instantaneously to create magnificent, intense peaks and introspective, exploratory troughs. To paraphrase bassist Phil Lesh, they became fingers on a hand; moving separately, but always in relation to the others.

Their concerts became places where the barrier between audience and band was broken down, with every person in the room collectively experiencing the same transcendent and entirely unplanned moment. Intertwined with this experience, and the very existence of the band itself, was LSD. The band solidified their direction through performing at Ken Kesey’s famous Acid Tests in 1966. It was a drug that epitomised feelings of transcendence, breaking down barriers between the self and the external world, and being completely in the present moment.

Despite never having seen them or their music performed live, I’ve found myself increasingly obsessed with no end in sight. Almost all of their live performances are available to listen in high quality, for free, on archive.org. There’s virtually an endless amount of music to listen to, and since the band evolved their sound so frequently, it’s easy to understand how one gets hooked. They were well known for never performing a song exactly the same way twice.

The fans of this band are overwhelmingly white, American, and somewhere between the age of 40 and 70. I’ve noticed I fail to fall into any of these categories, yet I think the fact that I have become such a fervent listener speaks volumes about the music itself. I often find the massive subculture surrounding the band quite cheesy and typically American, but still, I can’t deny the brilliance I so often find in the music itself. My passion for this band far eclipses any of the musical phases I had in the past, and I can definitely see it continuing many years to come. I hope my rantings and ravings have inspired some to give them a closer listen, because getting sucked down the rabbit hole is well worth it.